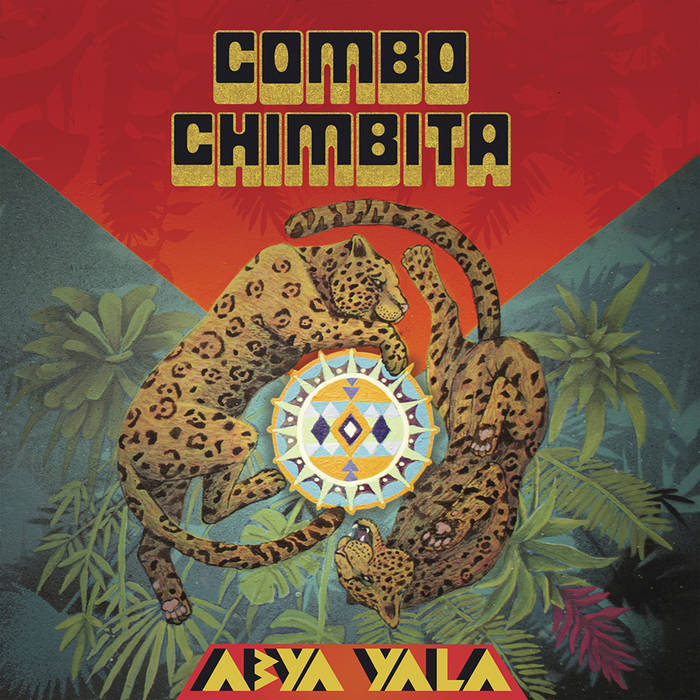 Rooted in Colombia and based in New York, Combo Chimbita lives in the future. Visit them at www.combochimbita.com & on facebook.

After playing together for years, powerhouse vocalist Carolina Oliveros, synth and bassist Prince of Queens, guitarist Niño Lento, and drummer Dilemastronauta began experimenting with different traditional musical styles during their late night residencies at Barbès in Brooklyn. Exploring the connections between visual identity and improvisational long-form trips, Combo Chimbita came together as a four-piece band after they started encouraging more vocals by Carolina Oliveros, who tightens the rhythm with her guacharaca. “Her voice is so powerful that it leads us in that direction,” says Prince of Queens. Their thunderous first EP, El Corredor del Jaguar, was released in October 2016 on Names You Can Trust and recorded in Combo Chimbita’s DIY studio, El Bunker.

The band draws on “traditional music from everywhere: Panama, Caribbean, Colombia, tamboritos, ‘70s funaná from Cape Verde, kompa from Haiti, cumbia, dub and reggae from Jamaica. We try to incorporate it in a way that if feels ours, so you hear these influences there but they come from our background, and our background is heavy rock, psychedelic funk and soul,” says guitarist Niño Lento. As Prince of Queens puts it: “Combo Chimbita is like a comeback to that raw punk energy, back to where it all started for me. But then obviously with the elements that we’ve grown to love and appreciate: the African diaspora and Caribbean and South America.”

“The rhythms and music we’ve been listening to lately have helped me to discover and develop my real voice. I can sing in many different ways if I want to—jazz, pop, opera, metal—but sometimes you’re just imitating. You have your own voice to explore,” says Carolina, who started out in a metal band.

“The melodies come from the region where I’m from—Barranquilla, on the Caribbean coast. It has influenced me in everything: my career as a singer, my way of questioning, and different ways of singing, starting from a natural and organic place close to my breath. I identify with this music; it’s close to me and connects me to my city, reminding me of what I used to listen to as a kid. That kind of groove and that feeling, it’s the music of my family.”

“New York has also helped shape the philosophy of all the music we make. Going to S.O.B.s and watching traditional music all over New York is really inspiring,” says drummer Dilemastronauta. “Here you go to record stores and a lot of the dollar bin records have tons of Haitian music. That’s the music that is out in the streets, like near Brooklyn and Queens,” adds Prince of Queens. “With Combo Chimbita, we’ve been on this quest to find the clues in the records from the past that connect the dots between the different places through the music. We’re internalizing the clues and also leaving them for the future too.”