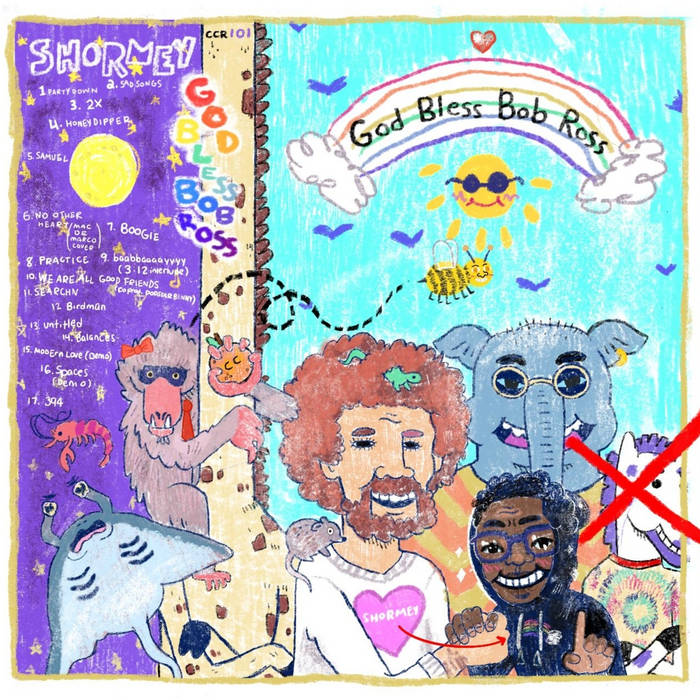 woozles this is easily one of my favorite releases of the year! i've had the CD playing on loop in my car for a month and it's so perfect for long summer drives. god bless bob ross and god bless shormey!! Favorite track: untitled.

breanna :~P listen to this ! buy this ! shower this w love !


" Chesapeake, Virginia artist Shormey Adumuah–known in music just as Shormey–showed up in a big way with the release of God Bless Bob Ross: A Collection of Low Fidelity Recordings, donating all proceeds to the Justice for Breonna Taylor GoFundMe.

It’s a 17-track compilation featuring eight tracks from Shormey’s past Bandcamp releases and nine new-to-streaming cuts, all drawn from a production period that started about five years ago. The project took shape long before Bandcamp’s revenue-sharing promotion and the international surge of action against police brutality.

“I probably started writing some of the stuff around 2015,” says Shormey. “The other tracks came about because I had started doing shows and I wanted to have something that I could hand out or sell afterwards. I just started making random songs from time to time and adding them to the tracklist.”

That may be why the finished list came out so loose and eclectic. While her 2019 EP Boogie Tape Vol. 1 focused more narrowly on keyboard-driven disco pop, God Bless Bob Ross stretches out, incorporating more guitar work, heavier beats, and loops that are less-sonically-defined. Take “PRACTICE,” with its over-over-driven chants, and “baabbaaaayyyy (3:12 interlude)” with its deep, resonant droning.

Save for a supersaturated cover of Mac DeMarco’s “No Other Heart,” It’s all original material. While most of it is self-recorded and produced, “WE ARE ALL GOOD FRIENDS” features Atlanta DJ Popstar Benny as a co-producer.

“Popstar Benny was one of the first people to ever post about my music. My mixing wasn’t great at the time, so I reached out and asked if he could mix and master it for me,” Shormey says. “He graciously agreed to do it. He also did the cover art for the song and did additional production as well, so I’ll always be grateful to him for that.”

Shormey finished the tracklist in late 2016 and began handing out homemade copies at gigs. She says the collection’s title, referencing the iconic painter and TV host, came completely by chance.

“Some friends were helping me burn the tracks onto CD-Rs, and we just happened to be watching Bob Ross, so I decided to name it after him.”

Richmond-and-Brooklyn-based Citrus City Records released Boogie Tape Vol. 1 as a cassette, and Shormey says there are plans for a physical release of God Bless Bob Ross as well. In the meantime, the digital version has more than enough lo-fi warmth and tape hiss to get you by.

- The All Scene Eye

If you like God Bless Bob Ross: A Collection Of Low Fidelity Recordings, you may also like: